Souad Mani is a transmedia artist and researcher, living and working in Sousse. (Tunisia). Since 2008, she has been working on her “Elle M’aime” project under the mode of propagation, sharing and pollination of its links with the living throughout the world. She tries to see
the extent to which it can lead to fruitful relations, and to “networking” singularities and how a photo of oneself can become a unique world and multiple at a time.
His artistic work is transdisciplinary, processuel and collaborative through techno-poetic experiments that are often evolutionary.
From land art, from performance, from video to Webart through photography and data visualization, she scrutinizes the modalities of the complex becoming of her self-portrait.
In a geo-pictorial and geo-relational approach it renews the questions around the status of the work, from the artist and the spectator to the era of collective intelligences and connected objects and seeks to give generative forms to the presence of the “being” in its branched and genealogical process.
She has exhibited in Tunisia, France, Italy, Dakar and Norwich. It intervenes in public spaces and illegally and temporarily appropriates isolated territories in Tunisia and elsewhere. She has led international collective projects.
Given timeEs (data like Datas not like giving and with an “e” Upper case).
Between recherches, arts et actions «Temps donnéEs» is a series of nomadic encounters between Souad Mani (transmedia artist) and the collective Apo33 (transdisciplinary artistic, technological and theoretical laboratory in Nantes) around the technical, conceptual and formal development of a ramification of the multifaceted project “Embedded Impressions” initiated in Gafsa (Tunisia) in 2016. Each encounter is a singular impression that varies from the place, location and context of the encounter and has a genealogical link with the previous one. It is essentially a question of giving multiple forms to climate data and linking them to other forms resulting from the processes already engaged by the collective and by the artist. ( to be discussed if necessary) 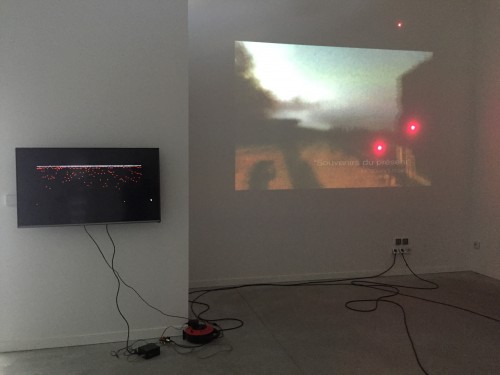 This is the design and creation of two examples of an IOT object with the role of collecting meteorological data and generating databases, in order to put it in different situations, of both artistic interventions and representing a collective intelligence. The purpose and the project are now many forms of reflection and representation and begin to transform technically, conceptually and formally in collaboration with the Apo33 collective.